"I forgot he was Black."  The comment by Chris Matthews simply indicates how deeply rooted racsim resides in the white psyche.  Unknowingly, Chris longs for some post-racial nirvana where we don't see race at all.  In this non-existant world, equality and fairness emerge based on the "content of one's character." The first stage in this transformation is to close one's eyes in a room full of white folks, and imagine that the Black person speaking isn't Black.  If we didn't know any better, we would think that he is just as good as us white folks.  In fact, for an hour "I forgot he was Black."  See http://www.youtube.com/watch?v=RUvntmgO0LY. 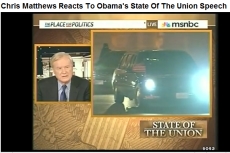 The problem with this longed for nirvana is that we have to live in the here and now.  In this world race, and culture, and ethnic preferences, and nationalism -- as well as racism -- all exist.  Subconsciously, as a product of white racist privelege, many whites cannot reconcile that Barack Obama can be "Black AND President."

To be President, he must be some post-Black incarnation that is acceptable to the inner self of those infected with "white racist privilege."

Many whites have overcome the infection, or they have been vaccinated against overt hatred, and malice of heart.  But the disease has not been eradicated.  It is like recovering from an addiction.  Recovery is never complete.  One must battle the demons one day at a time.  So it is with well-meaning whites like Chris Matthews.  He didn't know he was infected until his mouth betrayed him, and then he spent more words trying to explain what he really meant than necessary.

As for me, I don't want anyone to EVER forget that I am Black.  Accept me or reject me, complete with my Blackness.  But don't erase my culture, my heritage, my color -- to fit some imagined post-racial notion that helps to absolve your white guilt.

More in this category: « All white basketball league States with highest black Homicide Rates »
back to top