Many of us have voted already.  Some of us are worried, anxious, nervous about the outcome tomorrow.  I have two offers for all of us to get through the next 24 hours.  Please read below and pass on to your friends:

Here is what you need to do to get to sleep tonight.  Listen to this song:

The Obama Song (World of Friends): Bridges for Obama 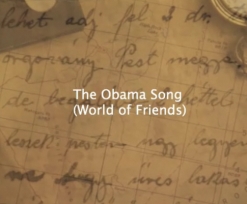 Here are five ways to make sure you don't wake up pissed off Wednesday morning.

Step No. 1 - Know the rules.
The combination of record turnout and electoral shenanigans will make many polling sites crowded, chaotic scenes. So local election officials have been urging voters to help ease the process by voting early. And in many states, it's still not too late to do so-find out if yours is one of them and, if so, go today.
For those who must vote on Election Day, the most important first step is make sure you know where to vote and what rules you must follow. Go to Vote411.org for detailed information at http://www.vote411.org/home.php.

Step No. 2 - Separate the lies from the truth-then spread the latter.
Don't be scared away by the sorts of lies and empty threats that have been popping up around the country. If you hear a scary rumor, it's probably a lie.

Step No. 3 - Actually show up to vote.
Elections have to be close enough to steal, and if the millions of new voters who have joined the political process this year turnout on Election Day, this one won't be.

Step No. 4 - Don't be shy-ask questions to make sure you understand the ballot.
Voting can be confusing. In some places, for instance, you can cast a party-line vote for all Democrats on the ballot. In others, such as North Carolina, party-line votes won't count toward presidential and vice presidential candidates; you must cast votes specific to those offices. If you're confused about anything, ask a poll worker to explain. That's their job.

Step No. 5-Don't leave until you've voted, period.
If you encounter a long line, chances are it's not an accident. Either local officials haven't provided enough resources or Republican operatives are deliberately slowing the voting process. If you give up, they will have successfully stolen your vote. So be prepared: Bring a friend, a book, some snacks or whatever you need to pass the time. Particularly if you're concerned about standing too long, bring someone who can hold your place while you rest.
And if someone challenges your right to vote, ask for a "provisional ballot." These ballots are set aside until after Election Day, when election officials are able to go back and confirm the voter's eligibility.

America will make history tomorrow. We'll either elect the first black president-or John McCain will have stolen the election. It's up to us to decide which version of history gets written. (by Kai Wright, TheRoot.com)

More in this category: « THE UPCOMING ELECTION, AND THE PRECIPITOUS DECLINE IN THE VALUE OF PALE SKIN. Are We For Real? - Just Sayin - November 2, 2008 »
back to top