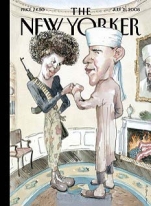 New Yorker illustrator Barry Blitt says his controversial cover was intended only to show that the incessant rumors that Obama is a closet terrorist are preposterous and ridiculous fear mongering. Team Obama’s rage at the inflammatory cover was ballistic and nearly everyone, including Republican rival John McCain, expressed the same anger at the New Yorker. But Blitt’s point – that the ridiculous rumor-mongering, gossip, slurs, and flat-out falsities about Obama’s religion, patriotism, birth and, of course, race are deep and widespread – is horribly true.

Even more frightening is that those slanders may touch a nerve in an unknown but frighteningly large number of voters. That danger was there from the start and there were packs of Web sites ready to deepen that danger.

Obama had barely finished his announcement on the steps of the State Capitol at Springfield, Illinois in February 2007 that he was in the hunt for presidency when the site “Barack Exposed” popped up on every search engine. The website was a put-up job by “Human Events,” a fringe, ultraconservative outfit. It promised to expose the "truth" about Obama, from his alleged role in corruption scandals to doubletalk on the issues, and of course the signature hit item: his patriotism. At the time, it was rightly laughed off as a typical smear and slander campaign by one of the pack of ultra-conservative hit squads.

But the laughter didn’t last long. Obama’s breakout win in the Iowa Caucus in January instantly marked him as the potential Democrats’ presidential go-to guy. It also set off alarm bells among the blog hit squads. Here’s a checklist of the biggest, best known, and most virulent Obama dirt dealer sites that sprouted up after Iowa:

The anti-Obama bile, complete with the scurrilous and phony doctored photos of Obama as a Muslim terrorist, is the staple on many of the sites, and is repeated as a sickening mantra by the Obama character maligners. Obama’s White House bid has virtually breathed new life into the unabashedly white supremacist group Stormfront’s site. The group claims to get about 40,000 hits a day.

Google belatedly realized that its engine was rapidly becoming a top conduit for spreading the anti-Obama rumor mongering hate and shut down several of the more blatant anti-Obama sites. It sternly warned that any site that engaged in lathering Obama with vicious personal slurs would be promptly shut down. This drew some mild criticism that Google was stifling free speech, but the right to propagate malicious slander and lies hardly qualifies as free speech protection, let alone legitimate political criticism.

There were early warning signals of the on-line ugliness that could come. Talk show gasser Rush Limbaugh took the first real swipe when he derisively sneered at Obama as the “Magic Negro.” Limbaugh seemingly backed away from it. But the message was that Obama was not exempt from a racial dig. That was evident in the short-lived furor over Obama's former Southside Chicago church, and the controversial outbursts of his former pastor Jeremiah Wright.

The inference was that Obama's guilt by association made him a closet radical and a race baiter. But long before the Wright controversy broke in the national media, many of the above-mentioned anti-Obama sites had a field day lambasting him and Wright.

The nitpicking continued on the most trivial things such as his chain smoking, his admitted flirting with drugs, and pokes at his wife, Michelle, as outspoken, bossy, domineering and America-hating. This slander against her has been almost as popular on the sites as knocking Obama as unpatriotic and inferring that he’s a closet Muslim terrorist.

The great danger is that the lies and maliciousness the Obama slander sites busily fan could have resonance with some voters, especially the much fought over independents. They make up about one quarter of the American electorate, and the overwhelming majority of them are white, and centrist-to-conservative in their views.

The fear that the rumors could hurt Obama prompted his campaign to take the unprecedented step of putting up an anti-smear Web site to counter the lies. It also prompted Obama in January to participate in a teleconference call with Jewish reporters to refute the rumors that he was a Muslim.

Editors of the New Yorker may claim that they depicted Barack and Michelle Obama as flag-hating, unpatriotic, violent terrorists in order to show the vileness and absurdity of these slanders. But the magazine that is the nation’s staid, bastion of highbrow culture and thinking inadvertently or deliberately imprinted the damaging slanders in the thoughts of an even more unknown number of voters – just as the legion of dirt dealing Obama blogs have done.

Super Chef's Breakfast & More
Focusing on intense flavors, vibrant palettes, great customer service, and creative presentations, SuperChef’s Breakfast...
Nefertem Naturals
Our primary goal is to educate ourselves and others about how to use ALL...