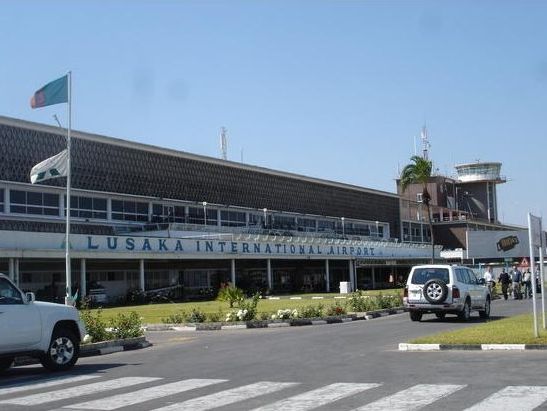 It is no secret that China has increased its footprint on the African continent with heightened influence and economic, trade and security arrangements with various nations. On a positive note, this new relationship between the emerging Asian giant and African countries has been characterized as a mutually beneficial arrangement and a departure from the imperialist exploitation of Europe and the United States. However, in some cases, Sino-African cooperation may assume the look and feel of a lopsided deal, which some would regard as neocolonialism based on debt obligations that African nations cannot repay, rather than an economic partnership among equals.

At the Forum on China-Africa Cooperation in Beijing, Chinese President Xi Jinping recently pledged an additional $60 billion in financing for projects in Africa, including $15 billion in grants and loans, $20 billion in credit, $10 billion in “development financing” and $5 billion to buy African imports. In addition, China will encourage companies to invest $10 billion over the next three years. The announcement is an example of China’s outreach to increase trade, investment and political ties with the continent. However, the Chinese leader did not address the issue of indebtedness, the notion that African nations are left far too economically beholden to Chinese banks. “China’s investment in Africa comes with no political strings attached,” Xi said. “China does not interfere in Africa’s internal affairs and does not impose its own will on Africa.” President Xi also announced eight new initiatives involving industrial promotion, infrastructure development, health care and other matters. 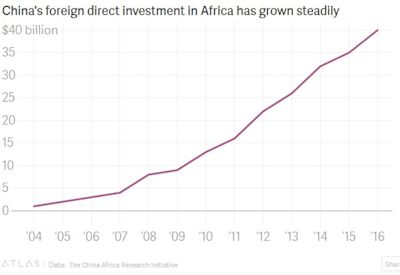 With the $60 billion pledge to Africa, 2018 marks a pivotal year for China. The Asian giant had already invested $124 billion in Africa since 2000, fueling concerns that African nations are saddled with unsustainable levels of debt, and forced to mortgage their oil and mineral resources as collateral or hand over other assets and resources when they are unable to pay back the Asian power. Labeled as “predatory infrastructure financing,” these agreements signed between China and Africa and other nations may lack accountability and transparency, with China maintaining the upper hand in negotiating the contracts.

For example, Sri Lanka has just given 70 percent control of its Hambantota port to China, a $1.1 billion, 99-year lease which local people, including trade unions and political opposition groups, call a “sellout” move threatening Sri Lankan sovereignty. The Indian political analyst and author Brahma Chellaney characterized the agreement as “debt-trap diplomacy” in which Sri Lanka handed over its port because it could not repay its “onerous debt” to China — “a reminder of how Chinese loans are collateralized by strategically important physical assets.” Loans from a Chinese state-owned bank built the $1.3 billion port, which opened in 2010. However, Sri Lanka, which owes China $8 billion in loans for infrastructure development projects, has had difficulties repaying the debt.

Africa Confidential reported that ZESCO, the Zambian state electricity company, was in talks with a Chinese company concerning a takeover of the utility, raising concerns about national sovereignty and Chinese ownership of key components of the country’s infrastructure. This came amid reports that China would take over Zambia’s Kenneth Kaunda International Airport to settle the African country’s debt defaults, and ZNBC, the state-owned TV and radio broadcaster. China owns 60 percent of TopStar Communications Limited, a joint venture created by the Zambian government to digitize its broadcast infrastructure, while ZNBC owns 40 percent.

The Zambian government has rebutted claims it is surrendering any of its public assets, or that China had such intentions, noting that ZESCO is a strategic company that cannot be sold to a foreign firm, and some of the China-financed projects have not been completed.

The size, scope and price tag of Chinese infrastructure programs in Africa raise questions about how these nations will be able to sustain them. For example, the Zambian government has signed off on $8 billion in Chinese infrastructure financing, in a country whose gross domestic product (GDP) is $26 billion, and where government debt is 55.6 percent of GDP and the annual budget is a quarter of GDP. The Addis Ababa-Djibouti Railway costs $4 billion, or nearly a quarter of Ethiopia’s 2016 government budget. Faced with mounting debt, many African nations will be unable to rely on their budgets to make their payments to the Chinese, and will have to resort to “in-kind” payments to Beijing.

The International Monetary Fund reported earlier this year that sub-Saharan Africa is experiencing a debt crisis, with 40 percent of nations in the region at a high risk of debt distress, and the number of countries unable to service their debt doubling to eight in the past year. According to a report from the Center for Global Development, Djibouti, Egypt, Ethiopia and Kenya are the African nations among 23 nations with a high risk of debt distress from Chinese financing. Djibouti is among eight countries with the highest risk of distress in the event of additional debt financing.

Djibouti, which hosts a U.S. military base, may become the latest African nation to fall into China’s debt trap. With public debt projected at 88 percent of the country’s $1.72 billion GDP, with China claiming most of it, Djibouti may find itself handing over its assets to its Chinese creditors. The African nation is also the location of China’s first overseas military base, which is designed to support Chinese missions in Africa and the Mideast, and will also perform other functions, including “military cooperation, joint exercises, evacuating and protecting overseas Chinese and emergency rescue, as well as jointly maintaining security of international strategic seaways,” according to Chinese state press outlet Xinhua. In July, Djibouti opened the first phase of the $3.5 billion Djibouti International Free Trade Zone (DIFTZ) project. The Chinese-built trade zone is an integral part of China’s multi-trillion-dollar “Belt and Road” initiative of infrastructure projects across Africa, Asia and Europe. China also financed and constructed the African continent’s first transnational electric railroad, a $4 billion, 470-mile railway between Djibouti and Addis Ababa. China further consolidated its control of ports in the Horn of Africa region when the Djibouti government terminated its contract with Dubai-based port operator DP World to run the Doraleh Container Terminal (DCT) — partly owned by China’s state-owned China Merchants Port Holdings — and embraced greater involvement from China in the nation’s ports.
As the United States foreign policy with Africa has stagnated and has been limited to the war on terror, China has filled the gap by procuring raw material supplies in Africa to secure its economic and military future with oil, diamonds and minerals used for electronics. Some voices within Africa have accused Chinese companies of coming to Africa to exploit the people and their vast resources, even more than European colonizers, with a goal toward making Africa China’s second continent. Before becoming president of Zambia, Michael Sata wrote in 2007 that “European colonial exploitation in comparison to Chinese exploitation appears benign, because even though the commercial exploitation was just as bad, the colonial agents also invested in social and economic infrastructure services. Chinese investment, on the other hand, is focused on taking out of Africa as much as can be taken out, without any regard to the welfare of the local people.”

Professor Alemayehu G. Mariam, who teaches political science at California State–San Bernardino, calls Chinese neocolonialism in Africa “the dragon eating the lion and the cheetah.” He counters the popular notion that China is developing African infrastructure in a “win-win” scenario. “China has literally invaded Africa with its investors, traders, lenders, builders, developers, laborers and who knows what else,” he wrote, adding that China continues to ensnare Africa in its “neocolonial trap” through billions of dollars in loans, and by using “debt relief to obtain exclusive rights to a nation’s natural resources and build military bases.” The Chinese presence in Africa, he claims, has been a gift to African dictators and has fueled anti-Chinese resentment among common people in Africa.

Goodwill aid from China may take the form of unfair practices, and African leadership must take note and stand against neocolonial practices, as International Policy Digest notes, highlighting the need to break free from dependency on outsiders and proceed with African development as an in-house matter. As the French daily Le Monde reported, Beijing presented as a gift to the African Union its $200 million headquarters in Addis Ababa, and its computer network with a back door data connection to servers in Shanghai for spying purposes.

The African Union may take cues from the European Union, which is pushing back against reportedly unfair trade practices by China — including acquisitions of Europe’s most strategic high-tech businesses and infrastructure — with new regulations against investment that is based on China’s political goals rather than market forces. The EU has become a key destination for Chinese investors, as Politico reports, with China spending €75 billion ($87 billion) in European acquisitions and investments in 2016, including energy companies, high-tech businesses, ports and banks. UK officials also confirmed proposals to regulate foreign acquisitions of British assets — with an eye primarily toward China and to a lesser extent countries such as Russia — reflecting moves by Western nations to fortify their foreign investment and takeover criteria as a matter of national security.

Further, some Asian nations are having second thoughts about their indebtedness to China. Malaysia recently canceled more than $20 billion in Chinese-funded projects on the grounds they would create unsustainable debt and were unnecessary. Meanwhile, Pakistan is reconsidering projects of the multi-billion dollar China-Pakistan Economic Corridor, a fundamental part of the Belt Road Initiative. African countries should take note.

What do you think?

Honey Muffin Boutique
A family owned small business offering a variety of delectable and stylish options from some...

Layne Corban
At Layne Corban, the focus is to make it possible for each bride to...