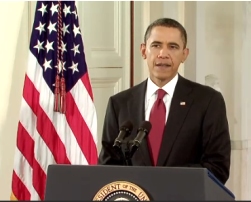 The pundits are already taking bets on the second term for President Obama.  They are asking if there are Democratic challengers, or if he has a chance to be re-elected.  Perhaps they are watching a different rality show than the one I see.

In an article for TheRoot.com, Joel Dreyfuss writes, "After governing for two years with his party in control of both houses of Congress, the president finds himself facing a Republican House, a barely Democratic Senate -- and diminished black power...
Barack Obama may not change course, but he will surely face a new reality in 2011. African Americans will likely wonder how effective the first black president can be in the next two years leading to the 2012 presidential elections."

It is amazing how quickly everyone forgets that this president has led the most productive session of Congress in 50 years -- with the party of "Hell No!" opposing everything he put forward.  Even today, the jobs report reflects 159,000 "private sector jobs" in October, and 4 consecutive months of more than 100,000 new private sector jobs.  Even while the Republicans are complaining that business owners are not hiring and investing in new growth.  Whose reality is confused?

What I don't understand is why it is that no one is giving "President Obama and his policies" any credit for the steady improvement in the economy and the jobs picture. They want to blame Obama for the persistence of the horrible impact of 8 years of Bush policies, but no credit for steady progress to get us out of this mess.  Am I missing something?

Here is the "New Reality" that Obama supporters must face, and we better "get it" soon.  The Senate is still controlled by Democrats.  But the subtle new balance of power in the "minority party" in the House of Representatives has been purged of most of the so-called "Blue Dog Democrats" -- and that reality is that the liberal and progressive base of the Democratic Party is more unified.  We have seen what a unified minority can do to confront Obama.  Well, now the shoe is on the other foot, with an added plus -- the Democratic minority has a majority in the Senate and a supportive President with a veto pen.  What can we do with that new reality?

We must unify early, and begin now to build a stronger base of supporters to help Obama get re-elected in 2012.  He gambled on a "big picture strategy" -- Health Care Reform, Wall Street reform, a Consumer Protection Agency, Education Reform, and a stabilized and growing economy.  That strategic focus cost some short term losses (good riddance to the Blue Dogs), but we can sell the results that will surely be visible over the next 2 years.  And the Republicans won't be able to take credit for the success, if the lame duck session of congress holds their ground on not extending the Bush tax cuts for the wealthy.  The economy will recover for the Middle Class, and the Democrats can lay claim to doing the right thing.

The new reality for President Obama is not doom and gloom.  As a coach who was losing a game at half time once said, "We got them right where we want them."  We can win again in 2012.  Yes we can!